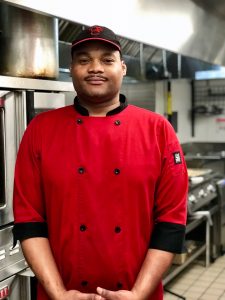 A passion for food and ingredients motivated Travis Stokes, Campus Chef at The University of Mississippi, to pursue a career in the culinary field.

After graduating culinary school in Pittsburg, Pennsylvania in 2006, Stokes went on to hone his craft under the direction of a French chef at an area historic hotel.

“I learned a lot of valuable lessons in large scale menu production and catering events,” says Stokes of the position. “Since that time, I have mastered many more skills and think of myself as a walking recipe book.”

It’s the ability to grow professionally and the diversity of Upper Crust Food Service that he loves most about his job.

“No two houses are the same,” he says, “The energy around the houses and the campus is great to be around. I love what I do and can’t imagine doing anything else with my life.”