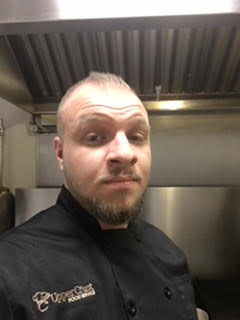 (We have a fabulous group of chefs and team members and we want you to get to know them better! We’ll be spotlighting our crew throughout the year on the blog and on social. Look for more ‘Faces of Upper Crust’ in the future)

Nick Aleo, Chef at Rutgers University loves the community he has experienced as a part of Upper Crust Food Service. “The hours are amazing. I have a lot of creative freedom, and my team is very motivating,” says Aleo of his position.

Having developed a love of cooking while working in restaurants throughout high school, Aleo later went on to receive his associate and bachelor of culinary arts degrees. Before joining our team, he worked in various restaurants in the Philadelphia area as well as for a private events touring company.

“I love working with college students. Younger minds keep me up-to-date with the latest trends and influence a modern take on current popular culture,” Aleo says.

While he credits his preferred dessert as banana ice cream, Aleo says bacon is the one food he can’t resist and rustic Italian cuisine is his favorite food to create.

When he’s not working, he enjoys riding dirt bikes, playing the drums and long boarding during the summer.