We’ve all heard that the early bird gets the word; that successful people are the ones waking up early; that it’ll make you happier and healthier. Well, CEOs and celebrities do it, so what exactly are the rest of us missing out on? Well, the truth is that for some people, waking up early isn’t some productivity hack, and it may even lead to counterproductivity. The trick is finding a routine that fits into your situation. Below are some tips for getting up early, the benefits of doing so, as well as why waking up early isn’t for everyone.

One of the benefits of getting up early is getting to eat a delicious breakfast earlier! Upper Crust Food Service provides delicious, fresh, high-quality meal plans for fraternities and sororities. To learn more about our college catering services, don’t hesitate to reach out to our team today. 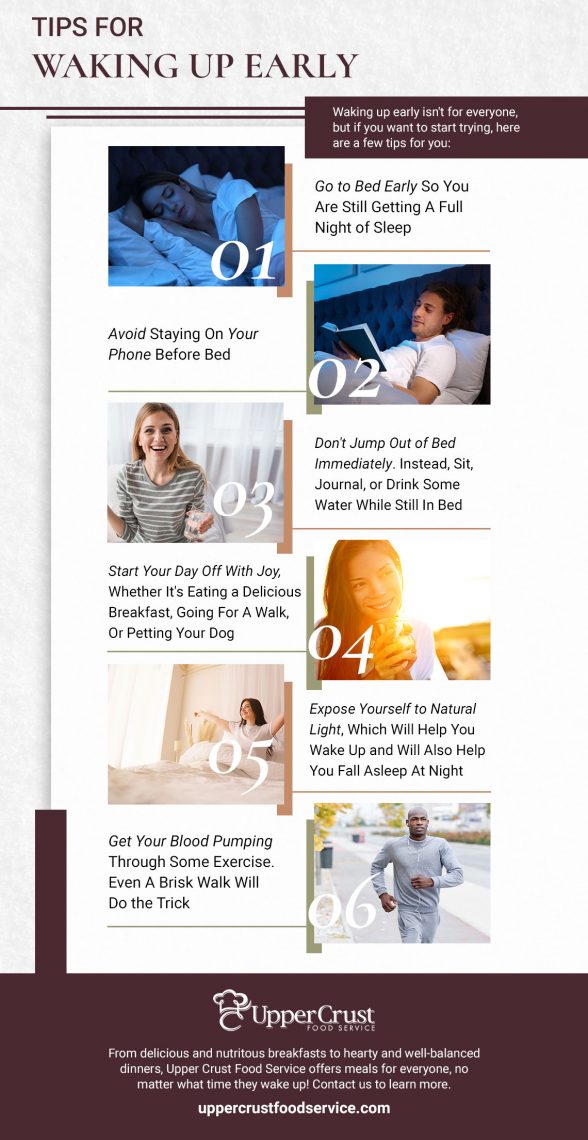 Waking up early and reaping the benefits will likely be the most attainable for those who are getting to bed earlier, so they are still getting the recommended amount of sleep. But, studies have suggested that early rising and success might be linked, and it could be because early risers are more alert and have a better cognitive ability in the afternoon. Early risers are more in sync with traditional corporate schedules and tend to have more proactive personalities, leading to better grades or more work being done. Plus, studies also show that a greater level of conscientiousness, or the quality of wishing to do one’s work or duty well and thoroughly, is also associated with individuals who are early risers.

But, it is important to note that getting up early doesn’t necessarily translate to instant success at the office. And for some people, getting up early doesn’t come naturally. Furthermore, some people are biologically more likely to feel more alert in the morning while others feel more alert and have better cognitive ability in the afternoon. There are a few factors that contribute to rising early and performing at work, like job satisfaction and enthusiasm.

Is It Worth Sacrificing Sleep?

Getting up early doesn’t always mean that people are more productive and are paving the way towards life-changing benefits. For some people, waking up early, especially waking up early when it’s not a regular habit, may actually be counterproductive. Getting a full night’s sleep, and getting the same amount of sleep at the same time each night is both important, and perhaps a bit more important than rising early.

Sacrificing sleep means that you hit with the negative side effects of sleep deprivation, which include moodiness, poor concentration, anxiety, and higher blood pressure. If rising early means cutting your sleep, then you may want to think twice about it. That being said, if waking up early is something you want to start effectively doing, then it may be worth adjusting your sleep schedule so you are still able to get a full night of rest before rising before the sun. This means putting your phone down and actually shutting your eyes.

Figure Out What Works Best for You

In Western culture, getting up early and working all day is a badge of honor. People who sleep in are considered to be lazy, and therefore the action is frowned upon. Having CEOs and celebrities flaunt their lifestyle and circadian rhythm makes everyone want to jump on the bandwagon, but it’s crucial to understand what works best, and makes more sense for you. Pay attention to when you feel the most tired and the most awake and do your best to sync your sleeping schedule to those times. This will help you fully harness your natural energy instead of making you pour from an empty cup because you wanted to be Mark Wahlberg (who wakes up at 2:30 a.m., which begs the question: when does he go to bed?).

Being a morning person can absolutely be done, but if it’s forced, it usually means that the late-sleepers who are setting earlier alarms aren’t necessarily any happier or more productive. When people are left to their naturally preferred sleeping times, they feel much better and will perform with a much broader mental capacity. Basically, correlation isn’t causation, meaning that there is no real clear connection between waking up early and the benefits people say it provides.

It’s more than just setting an alarm for 5 a.m. — it’s a combination of biological changes, from hormones to body temperature, that help get you up to attack the day. For people who are night owls, or who are more alert at night, getting up early means that they are forcing their bodies to function when their bodies simply don’t want to. Their body will still think they’re asleep and act accordingly, making them groggy and a bit more moody. Some research actually suggests that sleep preference may be biologically “bundled” with other characteristics. A study done by the University of Haifa’s Neta Ram-Vlasov found that more visually creative people had more sleep disturbances, like waking up several times in the night. But, there may also be a connection to genetics.

As you move forward into the spring semester, this may be important to keep in mind, especially as your peers brag about their early morning accomplishments. Sleeping in doesn’t mean you’re any less productive than the person next to you, but it could be worth a shot.

As always, Upper Crust Food Service is proud to provide students with the best college catering services they could ever dream of. From delicious and nutritious breakfasts to hearty and well-balanced dinners, there is a meal for everyone, no matter what time they wake. Contact our team today to learn more about us.

Request A Proposal
CONTACT US
Powered by Top Rated Local®